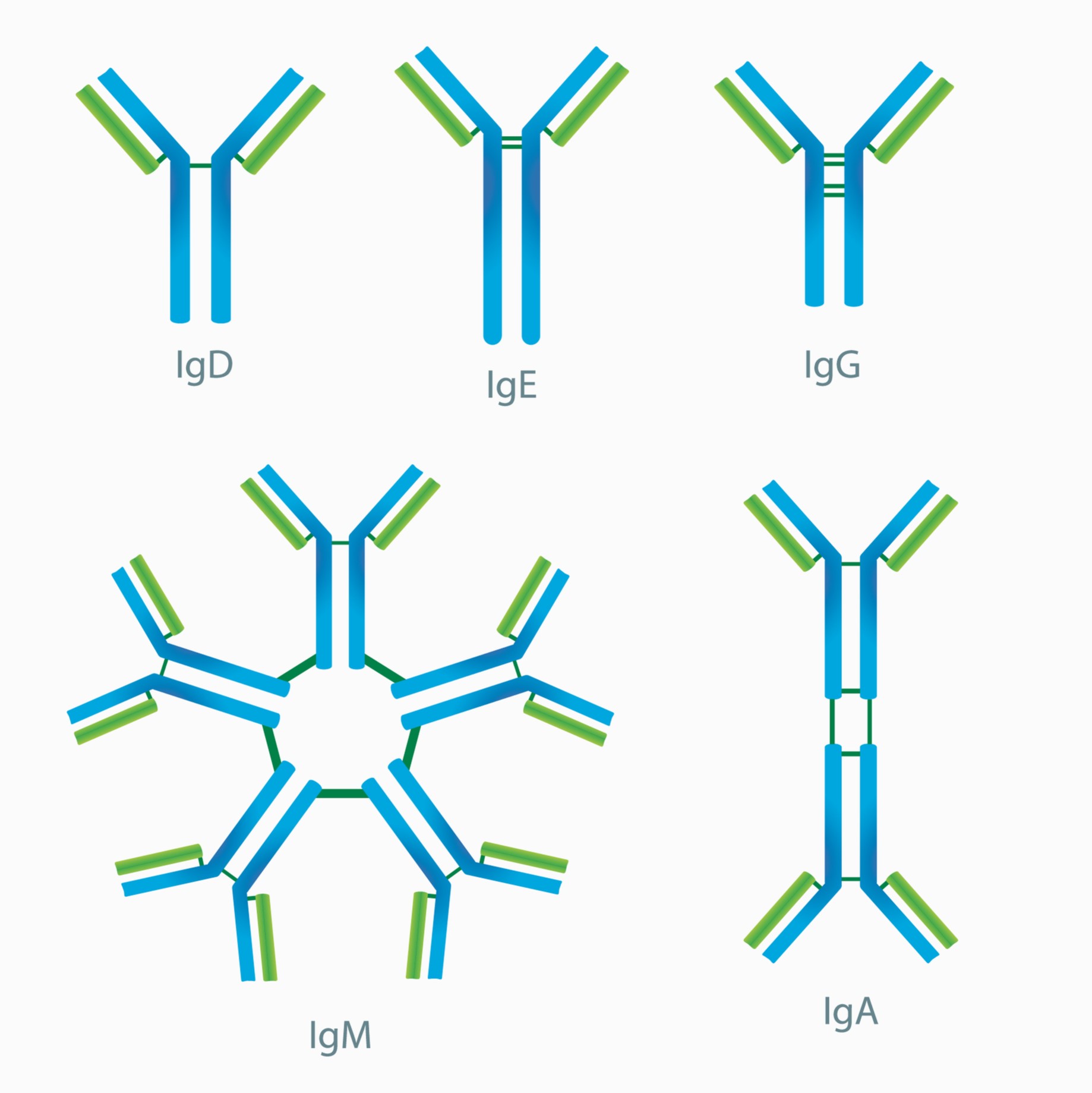 At the outset of the 2019 SARS-CoV-2 / COVID-19 epidemic, diagnostic immunoassay manufacturers focused on developing anti-SARS-CoV-2 IgM & IgG tests.
While the epidemic has progressed to become a global pandemic, diagnostic test developers’ efforts have also evolved. Recently, we have noticed an increase in interest for patient material positive for Human anti-SARS-CoV-2 IgA. This article will take a look at the difference between the different immunoglobulin sub-classes and seek to understand test developers’ interest in human IgA antibodies specific to SARS-CoV-2.

In a recent article we have explained the reason for interest in tests to detect SARS-CoV-2 specific antibodies. Previously infected individuals may be expected to express antibodies specific to SARS-CoV-2. Therefore antibody tests have utility for serology studies that seek to understand how many in the population have previously been infected, and may also have future use as companion tests for vaccinated populations to understand if satisfactory immune responses have been generated. Furthermore, one idea early in the pandemic which hasn’t gained much traction was to mitigate some of the economic impact by identifying and liberating from freedom of movement constraints, i.e. “lockdown”, those individuals who have already been infected by the virus and may therefore be immune from future infections.

There are 5 major classes of immunoglobulins. These are IgG, IgM, IgA, IgD, and IgE, each with its own structure based around the classic antibody “Y” shape consisting of Heavy and Light chains. 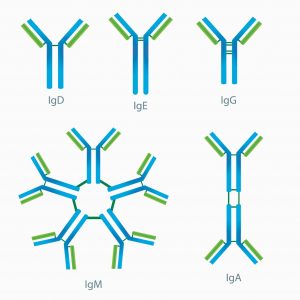 The most common class of immunoglobulin, present in the largest amounts in blood and tissue fluids, and the most commonly detected type in diagnostic infectious disease tests.

The initial class of Immunoglobulin made by B cells following exposure to an antigen, commonly present as a receptor on the B cell surface. Typically the earliest class of immunoglobulin detectable before levels wane. However, the situation can vary for different infections and different individuals, e.g. in Lyme Disease and Toxoplasmosis which we have covered in previous articles.

The main class of antibody found in many bodily secretions including tears and saliva, respiratory and intestinal secretions. Typically, IgA is not as stable as IgG despite being synthesized in large amounts

IgE is present in low concentrations in the blood. IgE antibodies stimulate a histamine response when binding allergens and play a crucial role in allergy testing; allergen specific IgEs produced in response to exposure to a given allergen can be readily detected in human serum or plasma and are diagnostic of specific allergies.

Why Test for IgA?

Whereas early studies of SARS-CoV-serological responses focused on IgG and IgM responses, some papers have suggested COVID-19 IgA may be the most readily detectable of the immunoglobulins in COVID-19 patients and detection of it can serve to increase test sensitivity.

Back in March 2020 Guo et al reported that IgM and IgA appeared earlier than IgG while IgG titres were highest followed by IgA and then IgM.

In a May 2020 article, Jääskeläinen et al. analysed sera from 39 patients and determined that IgA levels were higher than IgG in most cases. In many cases, the IgA level was high enough for the patient to test positive whereas the IgG level was below the threshold for a positive test result. Euroimmun SARS-CoV-2 IgG and IgA kits were used, which are suitable for detection in serum and plasma. 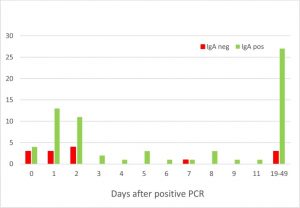 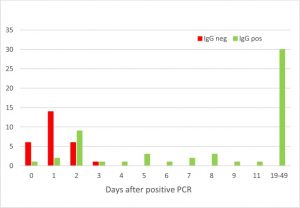 Infantino et al., have recommended the use of IgA tests in order to enhance diagnostic sensitivity of COVID-19 serology tests. They found that IgA levels reached concentrations higher than those observed for IgG and IgM and were often positive in IgM negative patients. Therefore, IgA could shorten the amount of time needed post-infection for virus positive patients to test antibody positive. 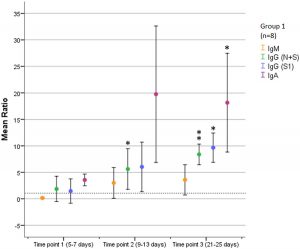 SARS-CoV-2 IgG, IgA and IgM in SARS-CoV-2 patients who were initially IgM negative

Collecting blood and converting to serum or plasma in order to detect antibodies is a fairly straightforward process, but perhaps not as straightforward as collecting saliva. Since IgA tends to be present in saliva, detection of  SARS-CoV-2 specific human IgA could theoretically be performed on saliva. Recent studies have confirmed that SARS-CoV-2 IgA is detectable in the saliva of COVID-19 patients.  Another paper in pre-print suggests that antibody levels in serum and saliva do not correlate particularly well so testing in both matrices would enhance test sensitivity even further.

If the time window between viral infection and antibody detectability is short enough (e.g. 0-2 days post-infection) the utility of SARS-CoV-2 serology tests could greatly increase. With many countries struggling to expand molecular PCR testing capacity to the levels needed, serology tests carried out using different technology and by different laboratories/personnel to PCR tests, would be additive to the existing COVID-19 test capacity. The price per test would also likely be significantly lower. Unfortunately, it would be hard to tell from the test results exactly when the patient had become infected, especially as antibody levels post-infection vary greatly between individuals, so the utility of such a test is still in doubt.

Interestingly, SARS-CoV-2 IgA also has potential as a prognostic marker, being associated with more severe disease.

Data from several sources suggests that the detection of SARS-CoV-2 IgA in addition to the other immunoglobulins (IgG and IgM) represented in SARS-CoV-2 antibody tests  can increase the sensitivity of COVID-19 tests when compared with tests to detect anti-SARS-CoV-2 IgG and/or IgM .

Logical Biological offers serum and plasma samples with measured positive levels of SARS-CoV-2 IgA, IgM and IgG as well as SARS-CoV-2 positive swabs. You can contact us if you would like to learn more.